The story of Kroger taking away my coconut milk.
It began several months ago with the monster remodeling of our Kroger store. Actually, it began a bit before that, when I started using So Delicious Coconut Creamer in my coffee and quit using dairy.

While the remodel tore up the store and all was chaos, I got my creamer at another store. One day, we went into our Kroger and found a whole new refrigerated section set up, and in it was So Delicious Creamer! I was pretty happy with that, since it made giving up dairy so easy.

Then I started a diet back in December and started using So Delicious Unsweetened Coconut Milk – that’s the green labeled one. I was so glad to see it in our new healthy/organic refrigerated case. Exactly what I needed in my neighborhood store.

So I was using a half gallon container every 3 or 4 days. I use it to make my shakes each morning, adding protein powder and blueberries or raspberries etc. Sometimes I’ll use it instead of the creamer. Anyhow, the point is I was buying this product several times a week.

Starting my 7th week on the Virgin Diet, I went in to Kroger to get my usual coconut milk and find that it has been moved to a different location on a lower shelf. I didn’t think much of it at the time… (cue the dramatic music duh duh duh)

So when I went back a few days later, I found that all of the spots where So Delicious Coconut milk  products once were, were filled with other products. They still had the creamer but nothing else. It was gone and there wasn’t a tag or empty place on the shelf.

Of course, we asked the store manager about it. The nutritionist said that it wasn’t in their plan anymore, so they weren’t going to carry it. We were offered to “special order” it but were told that could take a while to come in. Uh, this is something I use every day and have been buying multiple times a week here, so I’m not sure how that would work.

One of the managers suggested soy, I told him, “it’s not the same at all.” All of the products they added to the shelves were sweetened with added sugar and were in no way a comparable product or acceptable substitute. (just because it says coconut milk…) I specifically wanted the So Delicious brand because they have an unsweetened version and it’s very good. And if you’ve found something that works for your diet you want to keep using what works.

No So Delicious Unsweeted Coconut milk. Replaced at Kroger by other brand's full of sugar. Mgt. said discontinued. Unhappy. @KrogerCo

@KrogerCo yes, was told that can take a long time to come in. A recent experience w/special ordering took 3 tries. Pt 1

@KrogerCo why pull a product that sells well? None of the other products there now are an acceptable subsitute. (all have sugar)

@KrogerCo We did. did you see my longer Facebook post in which you were tagged? special orders take a long time & don't always come.

No. further. response. I guess Kroger checked off that they had responded so they were done being social on social media. <shake my head>

Our story continues when several days later, my husband stops in the Kroger to pick up a few things for dinner and spies the So Delicious on the shelf. He even took a picture of it. Oh, hooray, could it be back? No, the answer is no. On the weekend we went grocery shopping. And lo and behold, nada. What is wrong with this picture? There’s no green label So Delicious Unsweetened Coconut Milk anywhere to be found. 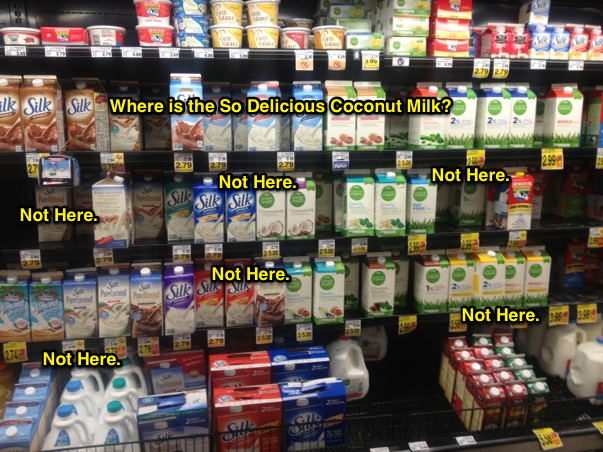 We did learn that those we saw on the shelf earlier in the week were from a special order they had done before and when they sold out, they were gone. The thing is, if it is special ordered and goes on the shelf and sells out – I’d still be out of luck.  Unless I hit the store at the right moment, I’d have to count on shopping elsewhere for it, adding additional shopping trips, both annoying and inconvenient.

They offered to special order it in again, they said they’d keep it in the back and I can ask for it. We’ll see, we’ve tried the special order route before on another item that is still in their plan and it took 3 tries before we were able to actually get the product, so you can understand that I’m hesitant to trust that process. Our local store management has been really responsive, it’s just that they aren’t always able to do the requested thing due to plans and policies.

The thing that is crazy –  the So Delicious products they removed were popular and a good seller. Kroger extremely expanded their own brand of “Simple Truth” items and seemed to add more Silk items too. I don’t want almond, I don’t want soy, I want So Delicious from the refrigerator section. (they did add So Delicous in the aseptic packaging, the non-refrigerated version, which I consider a second choice, would be good for trips and such) I also don’t have anything against the new Simple Truth items, I use some of them and they’ve been a welcome change overall.

Honestly I don’t like running around to  bajillion different stores to grocery shop – I  was happy to see the changes that our Kroger was making, they were getting more organic and clean choices that fit in with the lifestyle changes I’ve been making. At the same time, it’s hard to understand why they’d pull a popular product from their plan.

Come on Kroger, put it back in the plan and get it back on the shelf!

So now we see how well Kroger actually listens at the corporate level and I’d love a tweet or retweet or some Facebook love on this. 🙂

Do you think  this “special order” thing will actually work? Expect an update.