Thanks for the Coconut Milk, Kroger 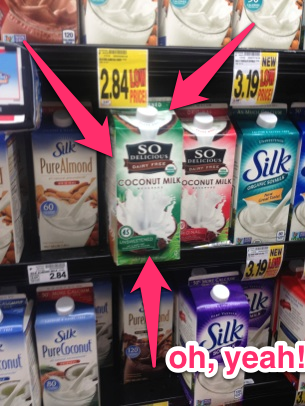 This is an update on my Kroger Coconut Milk Debacle, and not really a rant. Since then (roughly 3 weeks), I’ve been able to find the So Delicious Unsweetened Coconut Milk on the shelf most of the time. It’s not 100%, but it’s way better than not having it. Our store managers have been great and very helpful – glad to see it work out like it has. So thank you for working to keep in on the shelf, Kroger.

Now if Kroger would quit introducing new products, which we buy and like, then discontinuing them a couple of weeks later. They just did this, we bought an item one week, and it was discontinued by the next week.  A few week span can’t be long enough to judge a product’s viability, especially if it’s something that wouldn’t be used daily.

In this case, it was Stonefire’s flatbread pizza crust and since we don’t make pizza more than a couple of times a month, we’re out of luck. (yet they continue to stock the wretched boboli)  We do use Stonefire’s Naan. (when it is in stock, but that one has been problematic too)