Margaritas are supposed to contain tequila

Tonight we went out to our usual Mexican place, Don Pico’s, for dinner. Last week, Rodney took a bottle of Slimrita mix by the restaurant for the owner to check out. The owner was out of town, so Rodney left it on Javier’s desk and told the manager about it.

The Slimrita mix is lime juice with Stevia and xylitol, which are all natural sweeteners. Stevia is from a plant and erithritol is a sugar alcohol which is also naturally occurring. We took this mix by to show him how he could offer a healthier alternative that was sugar free to his customers. Hey! I am That Demographic.

This was important to me because I am doing the Virgin Diet (down 20 pounds!) so I’m avoiding added sugar and being in cycle 3, a margarita made with a mix like Slimrita is okee dokee on occasion. I was excited because I found a mixer that didn’t have Splenda (sucralose) or Equal, or any other artificial sweeteners or anything else gag-worthy or weird. (one even had soybean oil – yuck!) 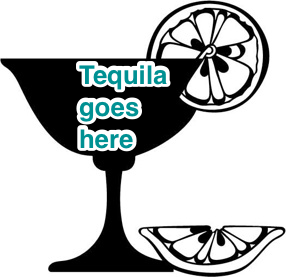 tonight my bottle of Slimrita mixer was no where to be found in the office. Guess it walked or got tossed. (the more I think about it, the more I’m sure Javier tossed it, thinking a rep had left it, not a customer) So they made me a margarita with lime juice and a very small amount of tequila. Way too weak and way too tart. Then to add insult to injury, they overcharged us for the drink at $8.95. I’ll pay $8.95 for a good, well made drink, all night long, unfortunately this wasn’t a good, well made drink – I’m not entirely convinced it actually contained tequila, the amount was minute. Rodney watched them make it, it was just a bit more than a shot in a supposed 20 oz. glass. (to give some perspective, regular frozen margaritas are $4.95 after happy hour and at least I would have gotten a buzz from the sugared version.)

The owner made it out to be “just business” and all about the money because “his prices are cheaper” – but that’s not it. I’ll pay for value and gladly, but this wasn’t a premium drink, it was a half-assed excuse to overcharge.  (Hopefully Rodney will comment more on his lengthy conversation with the owner tonight… honey?)

I’m just really disappointed in the whole thing – we have been patronizing Don Pico’s for over 16 years, going in, on average on at least a weekly basis. This is the place we’d go to celebrate birthdays, or after a hard week, after good news, after bad news, you know, that place you always end up at, because its just comfortable. You’d think that kind of loyalty would count for something, but apparently it means very little to Javier.

It’s sad, because so many of our favorite waiters, waitresses, hostesses and so on, have been run off. And yet we kept going. Now there has been so much turnover with the staff, that we barely know anyone. We used to be able to walk in, sit down, and have our order appear without ordering. Those days are gone. Need to find a new place to go. (and I want my bottle of Slimrita back, too)