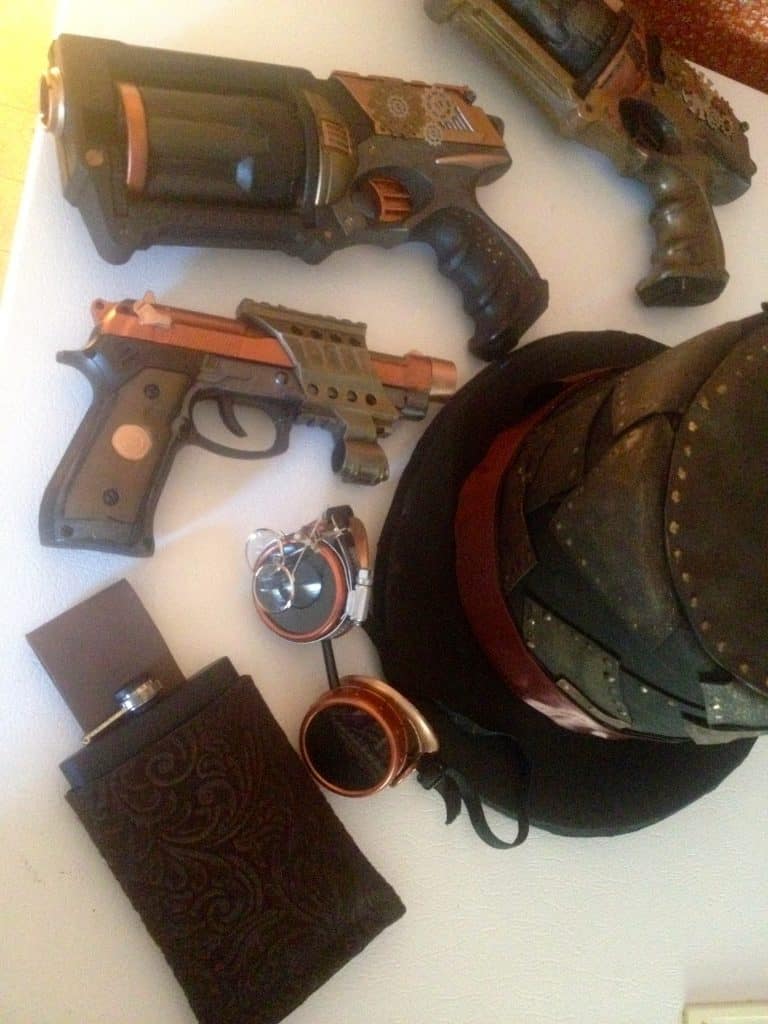 It looks like we’re going to a Halloween party this year, so started the process of costume madness a few weeks ago. When I do costumes, I. do. costumes. This means exhaustive attention to detail and lots of it. It also means making or modding things. I love the process and pulling things together from the hardware store, the craft store, the thrift store and our own closets to create costumes. So here we go again.

I’m doing Steampunk for Halloween again this year. The costumes I made a few years ago, aren’t going to cut it, having been pilfered and repurposed for other things, although there are some things that can be reused. Another factor is size changes in kiddos, they grow and don’t stay the same size! I’ve been collecting some ideas over on Pinterest too.

All but one of our family is planning to be steampunk, except for my son, the odd man out chose something creepy, maybe he’ll come around because I’m not looking forward to attempting the mask he needs. (Read on, he doesn’t change his mind.)

My steampunk character is a lady adventurer. She’s well to do and travels and investigates things because it pleases her. So her outfit needs to have elements that are a little dressier. I’ve got a burgundy satin skirt (from an elf costume a few years back) that will work nicely. I’ve also got a corset, but may get another for this costume. I will be making some additional belts and skirt hikes to fix the skirt length in the front (without having to do alterations). I think this one will come together fairly easily with the other accessories we already have. I also plan to make a top hat using a tutorial I found on Youtube.

My daughter’s character will be a steampunk engineer, who also happens to be a cat. She’ll need cat ears and a tail in addition to her goggles. She’ll be wearing shorts, suspenders, a black henley top and boots. I’ll probably also make her a corset like waist belt thing too for her wrench and other tools.

My husband will be my captain. Isn’t that sweet? He didn’t have a say, my daughter and I concocted the story that made him such. He’ll be wearing brown pants, a vest, possibly a captain’s style hat, goggles. He’ll also need a firearm of some sort – we have one we made out of a nerf gun, that might do. Otherwise we’ll find another or adapt another toy. We’ll add belts and other accessories too.

Already on my list is a trip to Harbor Freight, Michael’s and Hobby Lobby, and possibly Spirit Halloween. Some I may source online, but some things you need to see and hold. Stay tuned for more with pictures coming up.